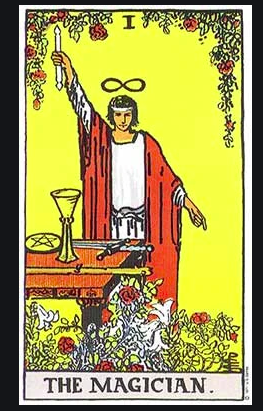 The Magician is enumerated number one. It is the symbol of unity. The Magician says that you are the one. In most monotheistic religions, it is the one God, the one universe; we are all one. Physics calls it the Theory Of Everything (TOE) that would unify all the fundamental interactions of nature: gravitation, strong and weak interactions, and electromagnetism.

One is the number representing the Sun, which historically tends to be the original god globally, probably because we all revolve around it.

The Magician has on their head is a snazzy ferronnière headband. Above their head is the cosmic lemniscate, the infinity symbol-shaped like an eight on its side. It reminds us that all life is eternal energy. There is something in the magic of the snake as it is a folk symbol of transformation and healing. It is doubled up here with the Ouroboros, the serpent devouring its tail around the Magicians waist.

The Magician asks you to look at what your dreams are and what abilities you have to fulfil them. The magician doesn’t want to talk you out of achieving your dream but to encourage you to look at all of your options and yourself from a more creative perspective. The Magician says that you will succeed by releasing yourself from the illusion of rigid thinking, restricting you. To free you up to achieve either that dream or a version of it.

Our world has some solidly constructed ideas about what you need to do to succeed, like courses, professional advice and special tools. Many of those ideas are theories told by capitalists and privileged white guys who make money from people prescribing to those ideas, in one way or another. Like a massive HECS debt, or the ‘how to make a million $’ books that you buy so that their creator can make a million $ sort of thing.

The card’s message is not to say that those options won’t work, but to encourages you to find your way with the tools you have now. Remember that history is made by creations invented by untrained people having a go and sometimes by mistake. So bear that in mind. The message here is to tune into what you want to do or create and go for it with what you have now. You don’t need permission, more qualifications or money. If you think you do, maybe you need to rework the idea.

The Magician says follow your passions and your curiosity and see what happens.

A Magician archetype is Leonardo da Vinci. One of history’s most incredible all-around genius humans to date. Leonardo was interested in art, engineering, maths, science, theatre and biology. He was openly sexually fluid, a prolific vegetarian cook, an entertainer and a dissector of cadavers. Proving you can have it all. Inspired by his curiosity, he would instruct and teach himself in any area that interested him. He established extensive knowledge from these areas that he then applied and used to inform his art and inventions. He also innovated sfumato, the blurring of lines and the eyes recognition of meaning and motion in its perception because he felt that was how we see reality. He also did what he wanted without a need to conform.

The Magician is asking you to unashamedly do you, get comfy with it and then be more. Had Leonardo not been so comfortable with his quirks and being, humanity would have suffered a tremendous deficit in favour of conformity. The card’s message is asking you to use your Magical skills and Monkey energy to let go of your restrictions, old habits, or a perspective limiting you so that you can see more clearly around the world of illusion.